The cacophony of sounds was overwhelming. The constant whirring of the air conditioner and the microwave vent was very loud and constant but over that she could also hear the X-box game, the TV from the bedroom as well as the conversations of the other people in the confined space. Her appreciation of quiet was never more desired or needed than in this moment of time. Deeply inhaling a breath and releasing it helped her to focus on her breathing. She realized as she took another deep breath that she could at least ward off the irritation that wanted to take control of her emotions and body. The value of silence is now recognized as necessary. She thought about how God felt when He wanted to get her attention and the noise was blocking His whisper. The sounds of the world calling for the attention that was due Him.

The sounds from the television were evaluated. Reality shows that did not feed anything but the frivolous and shallow cares of a world that refused to recognize that the quality of what you feed the mind affects the quality of the results. She seemed to grasp in this thought process that many of the people calling for help in the world today may need to change what they fuel themselves with in order to realize a change. What would she be willing to change? Even though television had lost a great deal of the consumption of her time because of the financial costs, the other options used were still grabbing at the consumption wheel. Netflix and other options of choice were still available. She thought about the purging process of removing the things that were taking away from the intimacy with God. This was a part of that process.

Having the choice to replace television with other options is indeed a good thing for the most part. However, it has been replaced with (X-Box, Playstation) war games and other such choices that still do not contribute to soul’s well-being. The time spent fighting the virtual reality characters and dodging bullets, driving fast cars, manipulating to kill everything and everybody to score points is truly a noise that takes away from the additional work the enemy would have to do. She thought about how being consumed by the games keeps us unaware of the tactics of the enemy at work in the environment around us. How much more time could be spent in prayer or reading the Word of God? Or, just being silent to allow the Holy Spirit to minister to the soul? She thought about how many have been duped out of a deeper relationship with Christ. 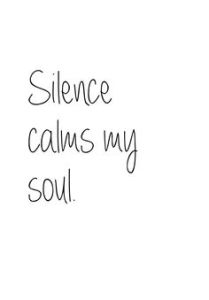 Family and friends are very significant and valuable to our lives. However, in the moment of recognition that silence is also a necessary fuel to maintaining strength and sanity, she realized that she would need to make sure to find that time and place to feel the silence; to relish the moment when the only thing she could hear would be her own breathing. She also realized that the intimacy of her relationship with God would grow exponentially if she could practice even her own silence. This epiphany moment of realizing that silence is a necessary food for the soul brought a quiet inside of her that she truly appreciated.

I received the Liebster Award from Pink Graffiti…thank you so much! I appreciate you.

Following are the rules, my responses to the ten questions, ten random facts about me and my nominees for this award. As well, I have posted my own ten questions for the nominees. Responding to this award has been interesting, insightful and fun!
END_OF_DOCUMENT_TOKEN_TO_BE_REPLACED